So what exactly is our ministry? It’s our prayer that through our work a church planting movement within the international academic and immigrant communities of the major metropoles of the world will be started. We believe that the Savior has providentially prepared the world for this type of ministry. Geo-political forces such as globalization, urbanization, and democratization have combined in interesting ways to make this type of ministry both an ethical, and strategic necessity. For those who follow the Savior, the alienation, pain, and death found in the city makes ministry within it an ethical necessity. The fact that the peoples of the world are gathered in the major cities of it make ministry there an imperative.

Deb and I feel that God has been preparing us for this ministry all of our lives. Both of us became Christians while in college, and were almost immediately drawn to the international community found in academia. Since that time, we have been either preparing or ministering to the international academic community. Over the last nine years, we have been ministering in Boston. One of the fruits of our labor was the planting of a little church right in the middle of the city. As that small body of believers blossomed and grew, we came to the realization that a ministry that effectively reaches out to other parts of the world must, first of all, minister to the whole world in Boston. As a result of God’s leading in our lives, we are now endeavoring to build a model church that will be a template for other churches in Boston and also around the world. In our church brochure, we said this about our purpose, “It is our prayer that God would give us the wisdom and the knowledge and the ability to build a church that is known for its Biblical orthodoxy lived out in lives of commitment; a place of spiritual and emotional healing; a place of protection, admonition and instruction in Biblical love; a place to find real, genuine answers; a place of the living God; a pillar and foundation for the truth.“ 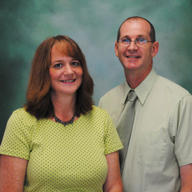 Darrel was born in a pastor’s home, so the Word of God was a constant part of his life. On a Sunday evening when he was six, Darrel asked Christ to be his Savior. Lori grew up attending a Gospel-preaching church regularly. One evening after their family devotions, when she was six or seven, Lori asked Jesus to be her Savior.

They met at Faith Baptist Bible College. Darrel and Lori were married in 1983. While Darrel was still a student at FBBC, he began a youth pastorate at First Baptist Church in Brayton, Iowa. While serving in Brayton, they were blessed with two children; Stephanie and Stacy.

God has given many opportunities to serve and learn over the years. Darrel worked for a photo typesetting and composition company while he was a youth pastor. Many times he questioned why he was working in a secular place when his desire was to serve the Lord full time. God knew what he needed to learn and how much time it would take. God prepared and called Darrel and Lori to a very specific ministry – the Spanish Publication Division of Baptist Mid-Missions (EBI).

Darrel is production manager of the EBI print shop and Lori helps in the accounting department.

Stephen and Evelyn have served the Lord faithfully in Peru for most of their lives.  they have been involved in starting churches, training pastors, teaching pastors wives, and starting a Bible camp ministry.